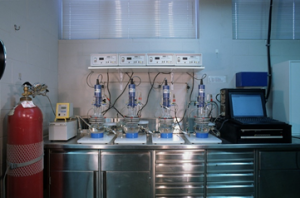 The RCE allows testing of the corrosion inhibitor in a controlled shear environment. The rotating cylinder apparatus is designed to create a known and constant shear stress on the inhibitor film by spinning the working electrode at speeds up to 5,000 rpm. This way, surface shear stress up to 32 Pa may be readily obtained. The corrosion cell itself consists of a glass flask jacketed with a circulating glycol/water mixture keeping the cell at a constant temperature. A positive pressure, anaerobic environment is maintained during a test by means of a constant CO2 purge. Electrochemical measurements are performed at intervals during the test, then the results are validated by weight loss and visual examination of the test element. This powerful technique allows rapid comparison of the performance of corrosion inhibitors in various applications. The tests for which RCE is particularly well suited are: